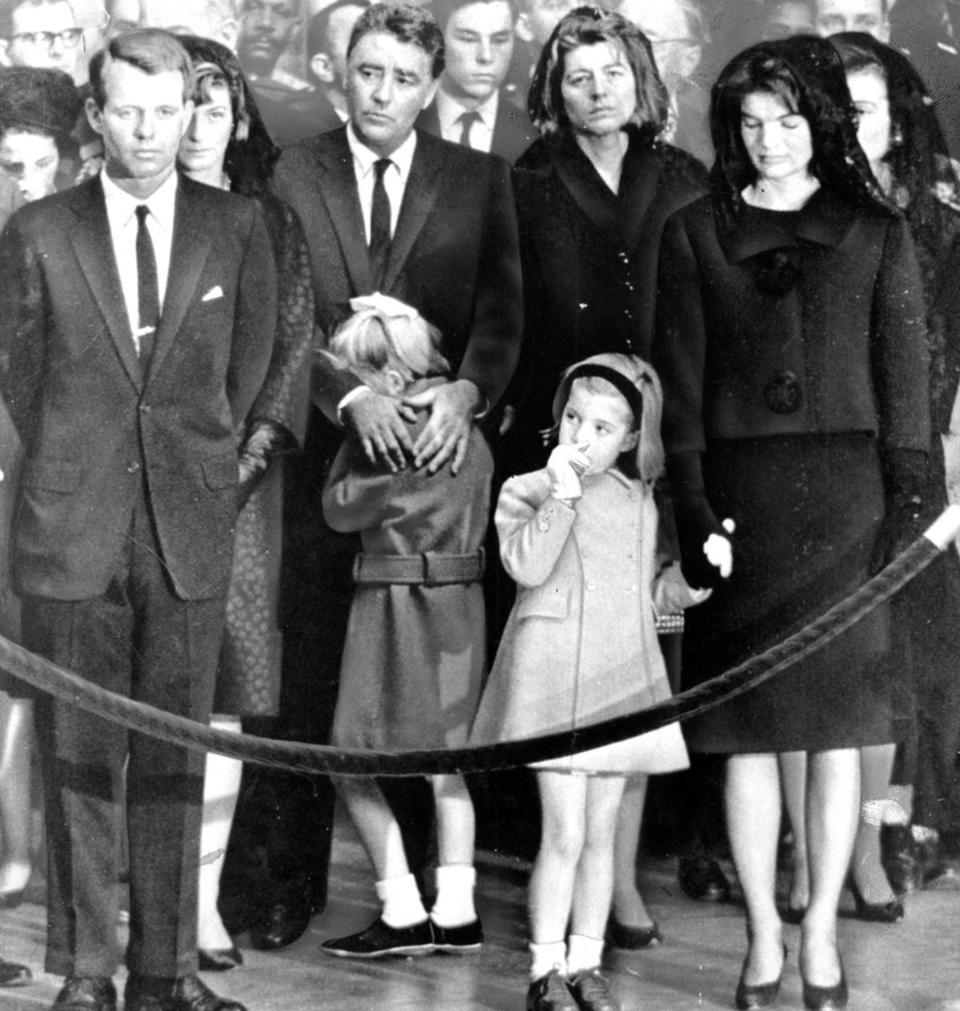 By Bryan Bender and Neil Swidey

Attorney General Robert F. Kennedy was sitting at his backyard patio table, clutching a tuna fish sandwich, when the call came through. Kennedy had spent the morning at a Justice Department conference on his intensifying war against organized crime. He had invited two of his employees from New York, US Attorney Robert Morgenthau and an aide, back to his sprawling home, Hickory Hill in McLean, Va., to continue the conversation over a private lunch.

A key focus of the morning meetings had been the Justice Department’s efforts to put Mafia kingpins behind bars. Now, by the pool on an unseasonably warm day in November 1963, Kennedy talked optimistically about efforts to neutralize one of those mob leaders, Carlos Marcello. At the very moment when Kennedy and his guests were digging into their sandwiches and clam chowder, Marcello was sitting in a packed courtroom in New Orleans, awaiting the verdict in his deportation trial.

Kennedy had turned 38 just two days earlier, and his mop of brown hair, slim frame, and charging intensity had always combined to project an aura of youth. Still, the bags under his eyes betrayed the weight of responsibilities he had been shouldering for the previous three years, serving as not just the nation’s top law enforcement official but also the president’s most trusted adviser and fixer.

Kennedy glanced at his watch. It was 1:45 p.m. “We’d better hurry and get back to that meeting,” he told his guests.

Just then his wife, Ethel, called over to him, holding the patio phone extension. “It’s J. Edgar Hoover,” she said, a look of worry playing over her face. They both knew the FBI director never called Bobby at home.

Morgenthau, in a recent interview, recalled watching Kennedy drop his sandwich, race over to the phone, and then quickly cup his hand over his mouth as he heard the devastating news. “Jack’s been shot in Dallas,” Bobby said with a gasp. “It may be fatal.”

No one had done more than he to create enemies for the Kennedy administration — the right kind of enemies, to the brothers’ way of thinking. In the mob, in corrupted labor, in Castro’s Cuba, in the rogue wing of the American intelligence system.

There is no indication that Bobby ever found evidence to prove a wider conspiracy. But judging from his actions after hearing the news out of Dallas, it’s clear that he quickly focused his attention on three areas of suspicion: Cuba, the Mafia, and the CIA. Crucially, Bobby had become his brother’s point man in managing all three of those highly fraught portfolios. And by the time the president was gunned down, Bobby understood better than anyone how all three had become hopelessly interwoven, and how much all three bore his own imprint.

An immediate focus, according to several of his aides with direct knowledge, was Hoffa. Bobby knew that a year earlier, according to a Teamster middle-manager turned FBI informant, Hoffa had complained, “I’ve got to do something about that son of a bitch Bobby Kennedy. He’s got to go.” Hoffa had also allegedly asked that informant if he knew anything about “plastic explosives” and suggested opportunities for getting Kennedy, when he was swimming alone in his pool at home or driving alone in his convertible, according to historian David Kaiser’s book, “The Road to Dallas.”

Bobby knew he had given Hoffa and his heavyweight mob pals plenty of new reasons to want to cut him down. At the same time the shots were being fired in Dallas, Bobby’s Justice Department was preparing for the jury-tampering trial of Hoffa in Nashville, which had sprung from its unremitting probe of the Teamster leader. From the federal courthouse there, Walter Sheridan, who had been Bobby’s aide-de-camp in the mob war ever since the Rackets Committee, told his boss in another phone call RFK made that afternoon that he hadn’t been able to find any evidence linking Hoffa to the assassination.

But, according to an oral history that Sheridan would eventually give to the John F. Kennedy Presidential Library, Sheridan later informed Bobby that Hoffa had been at a restaurant when he learned JFK had been shot. The reaction of the pugnacious labor leader was unlike that of most other Americans. “He got up on the table,” Sheridan said, “and cheered.”

Meanwhile, another Mafia leader and Hoffa associate, Carlos Marcello, sat in that New Orleans courtroom, awaiting his verdict. The second deportation trial for Marcello, who ran the mob in New Orleans and Dallas, was the culmination of a relentless three-year campaign by Bobby’s team to get him out of the country.

While not on trial at the time, another mob leader close to Hoffa was also chafing under the intense scrutiny of the Justice Department. Santo Trafficante Jr. was the Florida mob boss and former big-time Havana casino owner who lost millions when Castro took over Cuba. (Trafficante had been imprisoned in Cuba in 1959. His visitors during that stretch, according to Kaiser, included Dallas nightclub owner and mob foot soldier Jack Ruby, who gunned down Oswald in the basement of Dallas police headquarters two days after JFK’s murder.)

In addition to lots of underworld associations, Trafficante and Hoffa even shared a lawyer, Frank Ragano. In his book “Mob Lawyer,” Ragano detailed how Hoffa had instructed him in the summer of 1963 to tell Trafficante and Marcello that the time had come to kill the president. He thought Hoffa was just venting, and delivered the message jokingly, but said the two mobsters seemed to take it much more seriously.